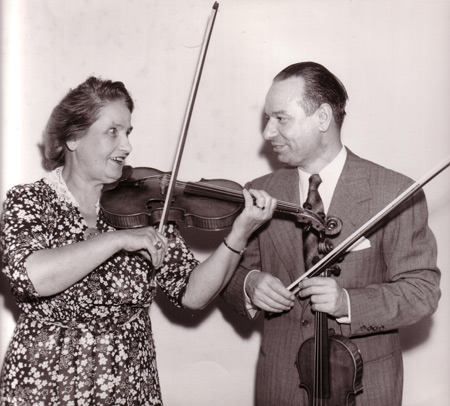 Zino and his mother, Ernesta

Born in Marseilles on August,9 1902,Zino Francescatti had a happy childhood at the top of  rue Dragon with the games of his age; he also spent long hours listening to his parents playing the violin. Beside his mother, an outstanding teacher, and his father, a solo violin in the Classical Concerts of Marseilles, Bazzini and Sivori’s (Paganini’s unique pupil) former pupil, he learns his first musical basics. Thanks to this intensive and often strict teaching, young Zino shows his talent very quickly, giving a first performance at the age of ten, playing Beethoven violin concerto in the Prat  Hall in Marseilles. The organist Marcel Dupré, then on the bill with him, tells his parents:”He’s a born musician, he belongs to the stock of the great”. Taking part in no music competitions, he goes on training, remaining relatively anonymous till 1925 till he plays in Palais Garnier in Paris Paganini concerto N°1 which was going to become one of the jewels of his repertoire. Jacques Thibaut hears him at the time and greatly encourages his career. Delighted with Debussy and Ravel’s music he goes on a fifteen-concert-tour in Great Britain accompanied on the piano by Maurice Ravel where he plays the famous “Tzigane”. Concerning this matter Zino Francescatti told that during an evening concert, Maurice Ravel had arrived in anger, being half an hour late. He was not worried about music but about his tie which he had vainly tried to match with his suit during all that time!

In 1927 Zino enters Walter Straham’s orchestra, then, in 1928, Gaston Poulet’s ,where  he met a beautiful and outstanding violinist ,Yolande Potel de la Brière who became his wife in 1930. Then Yolande Francescatti begins with him an extraordinary adventure which was also a wonderful love story (a sixty-one-year common life) of two outstanding 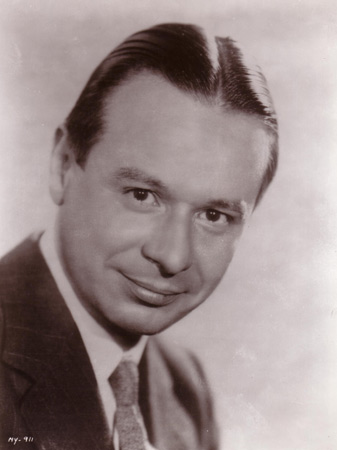 musicians. Yolande could have gone her own way for she was very talented but she chose to give up her career for her husband’s. A famous interpreter of the Romantic repertoire (some of his recordings are still references for music-lovers) Zino Francescatti is invited to perform in all the most renowned Halls in Europe; he goes from one recital to another when America asks for him in its turn. He turns down the invitation three times then accepts a tour in South America. In 1938 in Colon Theater he is so successful with Paganini concerto N°1 that the police must escort him whenever he goes out from his concerts to protect him from his admirers. Back in France in 1939 he goes on tour again in Europe. Nevertheless the famous Columbia Corporation trusts Arthur Judson, one of the brilliant managers who ruled the musical American life, to organize for the French virtuoso an important tour in the United States Planned in November 1939 the first tour coincides with the entry of France into the War alongside Great Britain. All the services to the States are suspended. In order to fulfill his commitments Zino leaves Paris in October 1939 to the Netherlands, the only country to maintain services with the New World. Upon his arrival in New York Zino begins his concert tour. During his recitals in Nashville, St Louis and Charleston the unanimous comments become enthusiastic about the French virtuoso.

Upon reading the first criticisms about his American debut, we can make out very clearly the distinctiveness of his playing  : ”A stunning technique that goes with a bright and unique tone which all his contemporaries will try to imitate” ,a quotation by Henryk Szeryng during a concert in Marseilles. New recitals bring along new triumphs. Immediately reengaged Zino doesn’t find it difficult to win the hearts of a demanding and cordial audience. Quickly established ,his reputation urges other numerous towns to apply to the Columbia Corporation to get another second tour. Definitely acknowledged to be not only the greatest French violinist but one of the most prominent violinists in the world, he thinks he follows his destiny by coming back to Europe in December 1939 without realizing all the same that its true musical part is now in the States where are set up the support points of his future career. At the beginning of the year 1940 Europe goes through the typical turmoil preceding a conflict. His commitments becoming more and more numerous, Zino covers Europe but he gradually finds himself obliged to cancel his concerts, first of all in Sweden then in Norway lately invaded by the German army. The greatest chaos prevails in Europe in 1940 but at the time Zino is pleased to see the coming of a second tour in the States. While the German troops are marching on Paris, Zino decides to leave to America but the Northern states now occupied can’t provide any longer services to America. Zino and Yolande try their luck in the South of Europe ,and, after getting their exit visas ,they are off again from Marseilles for Spain and Portugal so as to board for the USA. Once again destiny will smile on them. Yolande had actually reserved the tickets before leaving without getting any cabin but the young lady of the Export Line Company asks them to take away Mrs Capriolo’s mink coat, the Maritime Company Manager’s wife, and to hand it over to her in Lisbon; for this service they 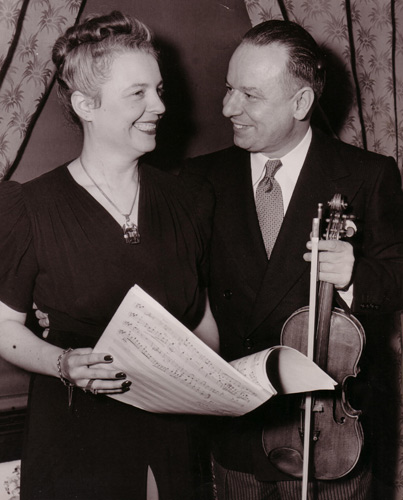 Zino with Yolande, his wife

will be given a cabin for this long journey. Arrived in New York on December, 3  ,1940, Zino is supported by the Columbia Concert Management Arthur Judson so as to begin the second part of his tour. From San Francisco to Passadena, while going through the country again, we can see him in Whashington then Chicago, Louisville, Boston, Detroit etc… where he alternates concerts and recitals.

His pet subject in his American debut Paganini concerto N°1 about which the interpretation remains unique is a compulsory piece of music in every new hall. With his faithful Sradivarius violin, Zino Francescatti will cover all the States and will appear with the best orchestras led by the most famous conductors. In the world tour with her husband Mrs Francescatti told us that remembrance about the concerts in Israel when Zino played seventeen times in a row to satisfy his audience because the hall was too small. He goes back to Israel right in the middle of the Six-Day War. The thunder of the cannons could be heard.”What do you decide?” he asked the conductor. He heard the answer ”I’m staying".”So, I’m staying too” Zino answered. And he stayed in Tel Aviv and Jerusalem to finish off his concert tour while the war was raging. If Zino Francescatti plays the greatest concerto works, he tackles as well happily chamber music. Nobody can forget can forget the exceptional duet he made with the pianist Robert Casadesus giving legendary interpretations of Debussy, Ravel and above all Beethoven. Then the Maestro spaces out more and more his performances. On December,16,1975,he gives his last concert in New York with the Philarmonic Orchestra conducted by Pierre Boulez, in the presence of his colleagues and friends, Isaac Stern, Igor Oistrakh, Itzahk Perlman, Pinchas Zukerman. 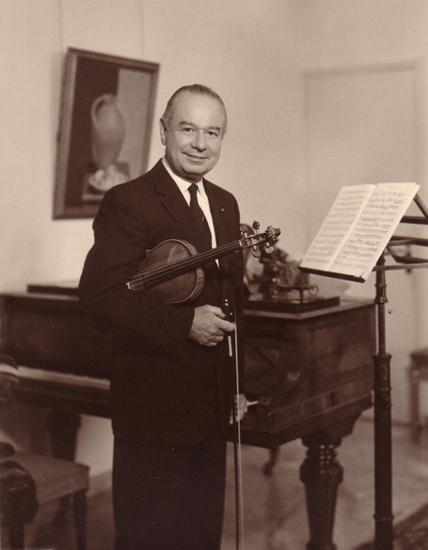 He plays in France for the last time in 1976 and then retires. “It’s inevitable”, he used to say,” I don’t want my audience to hear me not playing well, I don’t cut myself off from music but from my audience, music for me is a need, it’s the religion of love” “Thanks for the inhabitants of Marseilles, I’ve been a musician for nearly sixty years, I’ve seen all the places in the world but it’s here that I want to live and die” Zino Francescatti served as jury in the main international music competitions. He was promoted Commander of the Legion of Honour, Grand Officer of the French Order of Merit, Commander of the Arts and Letters, Commander of the Order of Leopold of Belgium. In 1986 he sold his Stradivarius violin (the Hart,1727) to his Italian colleague Salvatore Accardo. The same year he created with his wife an association with double purpose: helping the young performers and make as many people as possible discover the musical richness of the violin. Zino Francescatti passed away on September,16,1991 but Zino stays in every heart.

Spurred on by Roberto Greco, his artistic manager, the Association manages a variety of concerts in France and abroad devoting itself to promoting, advising and helping young artists. A true partner of the cultural environment, it is already considered as an International Ambassador, as Zino Francescatti was. The Maestro’s personality expresses itself with the same fervor, passion, simplicity, warmth and humility.